History of Waupaca and the Chain O'Lakes 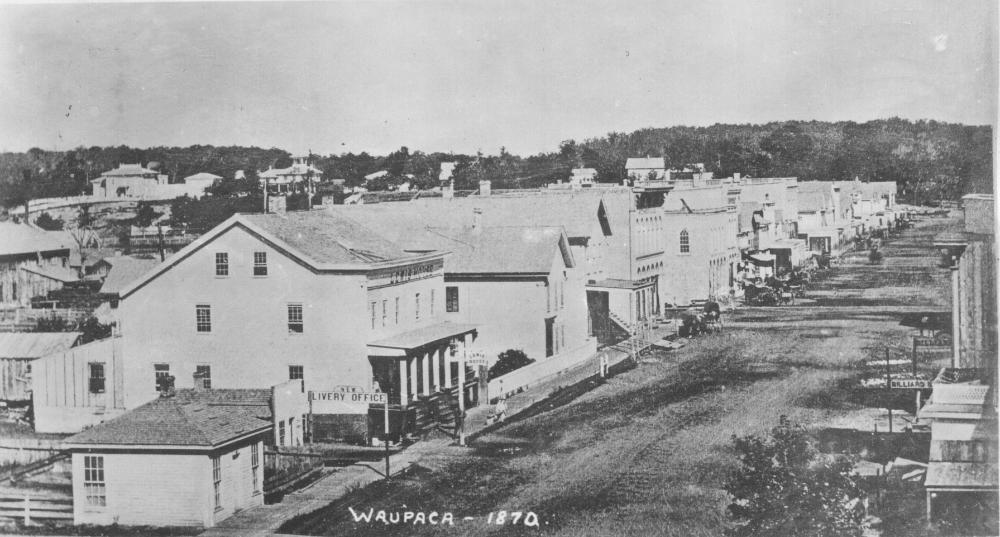 “Waupaca” is an Menominee word, Wāpahkoh, which means "Place of Tomorrow Seen Clearly." For more than 10,000 years, the Menominee occupied about 10 million acres, including Waupaca and the Chain O’Lakes area. The Menominee in the Waupaca area moved between large villages on Taylor and Otter Lakes and camps along the falls on the Waupaca River.

In a series of seven treaties, the Menominee ceded their lands to the United States. The final treaty, in 1848, relinquished the last of the Menominee’s land, which included Waupaca.

In June of 1849, the first white settlers--five men from Vermont--came looking for "the falls" and what was later named the Waupaca River. This group started out on foot from Sheboygan and included E.C. Sessions, Martin Burnham, William and Joseph Hibbard, and William Pratt. The Vermonters traveled along Lake Winnebago and then onto the current location of the village of Weyauwega. The settlers made camp near the end of what is now North Main Street with plans to harness the power of the falls and establish a community.   Following trails used for hundreds of years by the Menominee, the men traveled to "the falls," claiming land in the area now known as North Main Street.

In the spring of 1849, Capt. Augustus Hill Chandler Sr., along with his wife Polly and their son Col. John Wilkes Chandler and his family from New Hampshire, arrived in Waupaca County in search of land to claim. They settled along the Waupaca River in what became the Towns of Waupaca and Lind. Their settlement became known as the "Chandler Settlement" and today is near the Waupaca Municipal Airport.

Other settlers soon followed, and the growth of the young village was steady.  Mills were built along the Waupaca and Crystal Rivers as early as 1850.  In 1851, a Post Office was established and the settlement at "The Falls" was officially named Waupaca after the Menominee word, Wāpahkoh. The first businesses were flour mills, lumber mills and general stores. Voters decided to establish Waupaca as the county seat and a courthouse was built. The village of Waupaca was incorporated on May 4, 1857. Many new businesses started, and many new settlers came, all contributing to the growth of the city.

Railroad tracks were laid, and the first train arrived in Waupaca on Sept. 28, 1871. The railroad brought new opportunities for commerce and growth. In the early 1900s, tourism began to grow in the area, and many hotels and lodges were established in the city of Waupaca and along the Chain O' Lakes. An electric trolley line was completed to transport tourists from the city of Waupaca out to the Chain O' Lakes resorts in the early 1900s and helped to grow the tourism industry on the lakes. In the mid-1900s, industry in Waupaca grew, with companies such as the Madison Silo Company, Cary Manufacturing and the Waupaca Foundry being established.

Waupaca has changed through the years, but the community continues to grow and prosper around the river and lakes that initially drew its first settlers.

For more information on the Menominee, the first people in the Waupaca area, and other American Indian tribes of Wisconsin, visit these links below:

Effigy Mounds Culture in Wisconsin from the Wisconsin Historical Society

Click on the topics below to read more on Waupaca and Chain O'Lakes history!

Interested in receiving the latest news from the Waupaca Historical Society? Subscribe with your email address below!

This fall, he Holly Center will be open to the public on

Following CDC guidelines, masks are required in all of our buildings. We encourage all visitors to maintain a 6-foot distance from others and remain at home if exposed to COVID-19 or feeling unwell.